With over a decade’s worth of experience in running, developing, and executing technology cutover plans, we’ve learned one key point: The effective management of issues will have a very significant impact on the success or otherwise of your technology cutover.

In this blog post post, I’ll explore how this topic of effective issue management during cutover activities is typically approached, how it should be approached and what the impact of successful management can be.

To paraphrase something Bill Clinton once said, “It’s the issues, stupid!”

The Definition of an Issue

The first thing to do is define an Issue and make a clear distinction between that other well-known “I” in the technology and business world, the Incident. I’ll cover the relationship between issues and incidents in a future blog.

Whatever it is, the single and critical feature of an issue is that it is likely to cost you time. Time in the cutover context is the most precious and finite of commodities. So how you manage issues really matters.

The Inevitability of Issues

The best cutover approaches include detailed and diligent cutover planning and go-live preparation. The aim is to have every activity proven in advance of the roll-out period and for the entire exercise to run like clockwork. If only it were that simple.

Despite all this good practice and disciplined effort, I have never been involved in a live cutover of any scale that did not experience several issues.

Cutovers are, in that sense, a bit like life itself – accept that you’ll get knocked down from time to time but know that what really matters is how you deal with these setbacks when they do arise. That’s not an invitation for complacency or short-cuts in the rehearsal and refinement space. Far from it.

It’s simply a mature response to accept the reality that issues will arise during cutovers; Prepare for them and be ready to effectively manage and overcome them.

The first step in managing issues is to capture the fact that you have one to address. This should be done quickly, accurately and with a high degree of visibility i.e. everyone who needs to know should know as soon as possible. Issues in one area of the plan, such as cutover migration limitations, often impact other aspects of the plan - so sharing is vital. 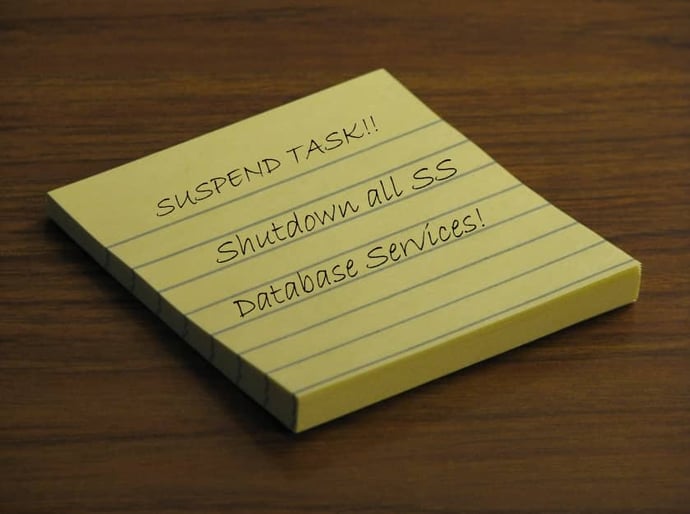 In my experience, I’ve seen a wide range of solutions to this critical first step:

The key theme of this blog is that issues are important. That doesn’t mean that all issues are “born equal” because the impact of every issue will be unique. Some issues will have no effect on the duration of the associated activity. Others will have a significant impact on that duration. Some issues will affect the overall timeline of the entire runbook.

For every issue, an impact assessment needs to be made at the earliest opportunity. That impact should initially be assessed against the associated activity itself. The broader impact on the overall runbook must then be evaluated.

This is perhaps the area where I believe most cutovers start to go off the rails.

Tip #4: Reducing the cost of issues

On a smaller-scale cutover, being inefficient in this regard will mean your cutover simply takes more time to complete. Your team will unfortunately work longer hours and the overall cost of your cutover will be marginally higher than it needs to be.

Let’s also assume that you have 15 participants involved over a planned 10-hour period. Let’s assume that the average cost per participant is US$50 per hour. If your small-scale change runs for 2 additional hours due to ineffective management of the issues encountered, that’s an additional cost of USD$1500.

On large-scale cutovers, the cost of time overruns really starts to ramp up. Let’s say you have 100 people involved at any given moment in time. That’s USD$5,000 to be saved or lost with every hour that you gain or lose. Over a weekend-long cutover, you could easily lose, say, 6 hours due to the inefficient management of issues. That’s USD$30,000 of unnecessary cost – not to mention the drain on your staff and partners. That experience could be repeated several times if you include rehearsals.

Even at this less painful end of the spectrum, these are outcomes you really want to avoid. There are better ways to spend your money and a much better way to take care of your staff.

Whatever way you look at this topic, it's clear that the effective management of issues will have a very significant impact on the success or otherwise of your technology cutover.

Demonstrating before the live cutover that you have the processes, tools and people in place to handle the inevitable issues is a fundamental boost to the confidence that your Exec team have in your ability to get the job done. When you have an effective and proven issue management solution, you can maintain a high degree of control, even in unpredictable circumstances.

One large-scale cutovers, managing issues effectively can quite literally mean the difference between success and total failure. This is the other end of the pain spectrum.

Inefficient management of issues could mean that your cutover timeline substantially suffers, to the extent that critical business services aren’t back up and running when they are needed. The dreaded service outage occurs.

In this context, failure means customer impact, brand and reputational damage. The overall cost impact to your business will dwarf the direct costs of the cutover team running on much longer than expected. Recent examples of major failures confirm that USD$100m isn’t an exaggeration of the cost implication and for some it’s much higher.

With ICEFLO, we've designed, built and refined a solution that handles all aspects of cutover lead responsibilities-- including issue management-- in the cutover context. If you'd like to learn more about how ICEFLO can help, please get in touch and let's explore some options.

In need of a Workday Cutover Plan? ICEFLO makes it easy. Check out a case study where we helped migrate a global bank from Peoplesoft to Workday.

Thanks for checking out our Blog. We'll be trying to make connections with customers and industry commentators through this blog. We'll be posting on any subject related to the planning and successful delivery of complex, large-scale technology cutovers.